Autonomous Driving represents the next major leap in the way we transport ourselves, and will radically change the business models around transportation. While the technologies are still maturing and regulations are still being debated and written, we look at some of the practical implications, especially on businesses related to the space.

Obama, currently President of the United States, leaves his final term with a present to the world of autonomous driving – that is, cars that drive themselves from point A to point B without human intervention.

To get a good feel of how far we have come along from an actual implementation point of view, please watch this video before going ahead:

At present, the ecosystem consists of major technology companies as well as car companies actively looking to make their moves into this space.

Some technology companies to note:

And some interesting partnerships:

The net scenario, as we enter 2016, is that if you are a Car company – you’d better have invested or partnered with a tech company to develop your cars into autonomous vehicles.

If you are a technology company, cars are merely new devices to enter into. Google and Apple already have dashboard interfaces with Android Auto and Apple CarPlay – of course, these are merely interfaces to ‘connect’ your digital lives into the car. The logical next step is get further integrated and then own the driving experience altogether.

Now, while most sites consider the technological impact of these solutions e.g. creating the ability to drive across the country:

In ~2 years, summon should work anywhere connected by land & not blocked by borders, eg you’re in LA and the car is in NY

I’d like contemplate on my vision of the impact to the various aspects of society and businesses of this.

The present demonstrated breakthroughs seem to be occurring in the ‘Developed Countries’, possibly with R&D also done in other countries where there is significant intellectual capital (looking at you, India).

But one critical function I believe, for the practical spread of autonomous driving globally is the reach of how advanced mapping and imaging technologies are. Below is an image that represents the present coverage of Google Street View, the 3D world view of streets taken by Google, freely available. 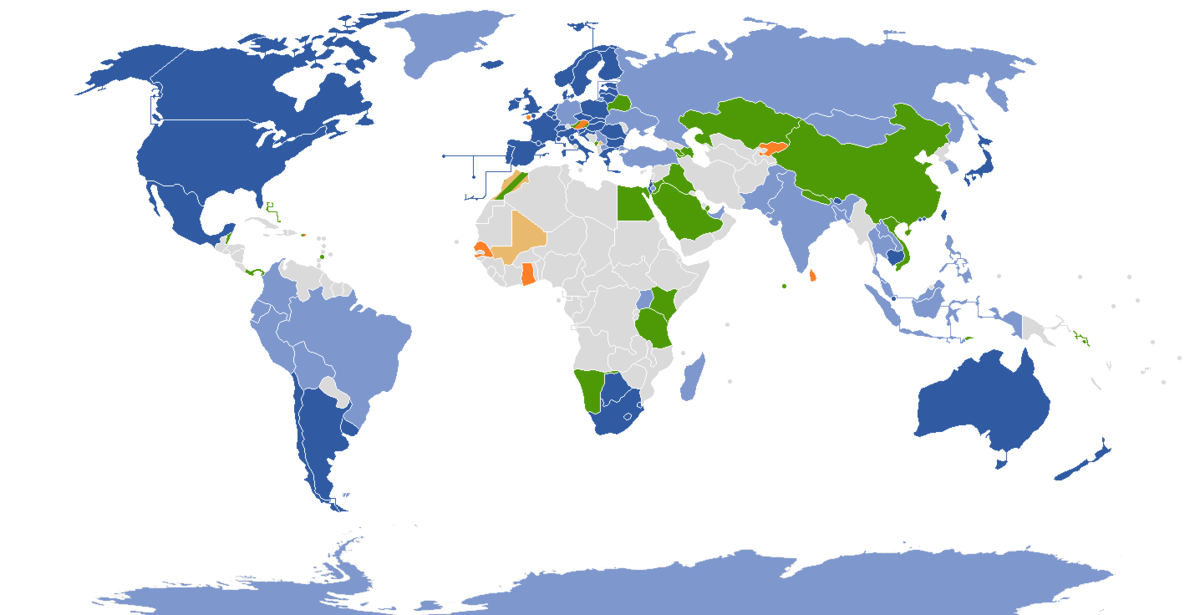 The maturity of the Google Street View, I believe, works as a good proxy of how well and how quickly autonomous vehicles will be able to work and spread globally. The dark blues of the above countries which so far make excellent candidates for bringing in Autonomous Driving. Of course, there are other factors, such as how well traffic rules are followed, how clear traffic signs are, and what the culture of driving is.

While most predictions are to have fully autonomous driving in the US by 2020 – it will take several years still for it to spread (similar to the other coverage areas). But likely by 2035 (broad estimate) there will be significant maturity in this space, with the AI (Artificial Intelligence) driving systems that make decisions on the fly with very limited information – they way human presently bumble along roads with a basic map, road signs, and if they were smart, a compass.

By 2040-50, we should have Autonomous Driving in most places in the world, driving significantly safer than most others. This will take some time for various societies to get used to but similar to how flights now fly 90% of the trip. This is the equivalent of taking the car out of parking and putting on the street, and then the car drives itself to the next place. We already have self-parking technologies, and now its a matter of just training the cars in regular driving within and between cities.

Car Manufacturers will no longer simply supply the physical vehicles and then get their hands off, as the critical part of the Autonomous cars is the software – the intelligence that drive the car. Either manufacturers need to partner up or they need to develop the technology in house, but once they have the software settled, they need to keep developing it.

This relationship thus changes the from a one off transaction to managing the car over the life of the purchase to the owner. This is similar to selling a service with hardware, a few levels above saying buying a phone with a data plan. This will fundamentally change the way car manufacturers will need to operate in the future. They can no longer be simple assemblers, but true custodians of the driving service. Either the car manufacturers do this, or they let technology companies front this Driving Service.

As you will read about the business models, the net result will be that there will be fewer purchases of cars  (marginally), as the cost of renting the service will be less than fully buying out a car. Of course there will be a significant number of cars bought directly, but the volume of ‘shared’ cars will be much much higher, unlike any other model we have seen before.

Today, if you want to get from point A to point B, and you mode of transport is a 4 wheel car, you would either have owned the car yourself, or you would have hired the car from someone, or driving around a Hired car (e.g. taxi, Uber)

With Autonomous Cars, you can still own the car yourself, and the relationship of ownership of a car would largely remain the same. The car would park in your parking, take you around where you need to, and drop you off and find itself parking, and get back to you when you need. We would change our parking systems to simply drop off and pick up and special zones, and parking would manage itself (possibly by your onboard car AI interacting with the automated parking system so identify the best space for you).

The more interesting changes in business models will occur where you are Hiring the car, like a cab service. Uber, the worlds biggest ‘startup’, knows this, and know that the next logical step is to incorporate self driving cars, or get left behind like how the present taxi industry is being pushed out by Uber. With self driving cars, the most expensive part of the managing the car – the labor, effectively gets automated, leading to massive cost savings (terrible for all the humans driving it, but great for the humans using the service).

Self-driving taxis would allow the taxis to run 24/7 without shifts. When there is some issue or the other, it simply drives itself into a service centre. Of course, this is the ultimate vision. The intermediate steps would be trials of this service in small spaces, but there would be a logical progression on this. This vision is clearly shared by GM and Lyft, who are investing $500 Million to get autonomous cars via a Lyft service. This would be what I call Next Gen Taxi.

The lines between a fully owned and on demand taxi service will be further blurred by new pricing and financing models where you can buy the car outright, but you can ‘sell back’ some amounts of time – similar to how one can buy solar panels and sell back electricity to the network.

How to survive as a business in this new world order – I think that deserves a post on its own. But in short, it will involve some hard decisions, and the right planning and partnerships.

One of the important implications of a constantly learning AI system is that the more people use it, the better it is for everyone. This is because each time one car drives on a road, it records the way it drove and then the next time another car in the system drives across the same route, it knows what to look out for and how best to tackle a road. It is like getting driven by someone who have driven on the same road a hundred times, vs someone who is just learning to drive – we logically trust the more experienced driver. Now, Tesla and Google are demonstrating that their systems are learning and adapting (Google claims to have driven 1 million miles already – many many life times of driving).

Cars AI systems may also have different Risk settings – similar to how humans drive and how they make decisions. For example, if its drizzling, is it safe to drive? What would have human do? Even more complex ethical systems – if the car is about to crash into a group of people, should the car swerve potentially killing the owner or drive into the group of people? Would different AI systems be programmed differently? These grey areas may eventually be regulated so that consumers are aware of the rights and restrictions.

As the AI system matures however, there will come a point where it would be absolutely much safer to let the AI system drive your car, rather than you intervene in it. The computer system will be able to analyse all data around it, while humans are limited to what they see in the one direction. While the present systems are still basic, they are improving rapidly. Ford is now getting close to cars that know how to drive in snow.

A Next Gen Taxi company could be one that starts new – by partnering with a company that already has the autonomous software and vehicle system. It would merely provide the customer interface of managing the vehicles and payments.

Alternatively, one could finance the enterprise, by owning a fleet of say, GM vehicles, and then ‘sell back’ my fleet onto their network, or to Lyft.  The servicing could be managed by myself or by GM, and the owner may save costs by servicing myself. The ease of an individual doing it is also quite simple, hence presenting low barriers to entry, results in higher competition and hence lower profits.

Hence, the more control you have over the overall engagement, and thus the more value you give to the system, the more profit you can extract.

As we move in parallel to Electric Vehicles, there need to be electric charging stations (like the SuperCharger by Tesla), one can own these full service centres that provide charging and tuning. When the cars are not in use, they would need their own R&R – these can be away from congested places, ultimately freeing up the zones and optimising traffic.

All of the radical changes in business models, and the shape of the new transport world, are all presently dependent very heavily on technological advancement. Once this is cracked, expect to see unique tie-ups, for the benefit of consumers just looking to get from A to B as smoothly as possible.